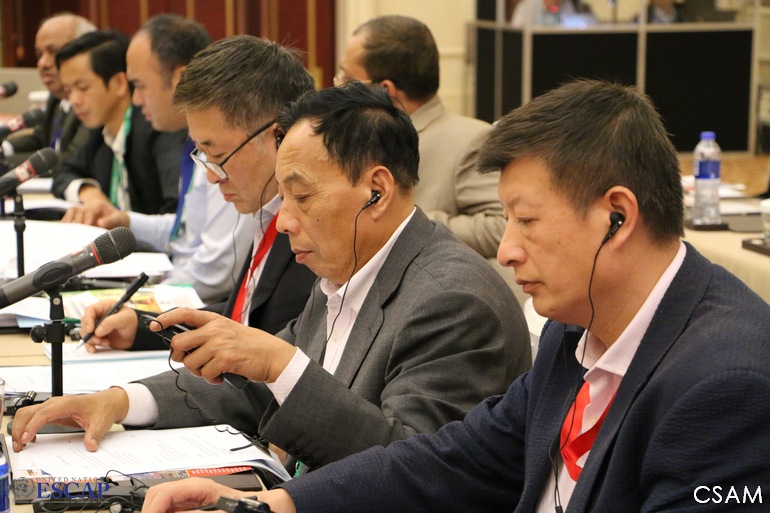 The Roundtable meeting, with a theme “Connecting for Growth and Cooperation”, was organized by the Centre for Sustainable Agricultural Mechanization (CSAM) with the support of the organizers of the 2014 China International Agricultural Machinery Exhibition (CIAME 2014) and funded in part by the China-ESCAP Cooperation Programme. Over 50 representatives of national agricultural machinery associations and private sectors from a dozen countries participated in the meeting held in parallel with CIAME 2014, including Bangladesh, Cambodia, China, India, Indonesia, Mongolia, Nepal, Pakistan, Sri Lanka, Thailand, and the Philippines.

Mr. Mao Hong, Chairman of China Agricultural Machinery Distribution Association and Mr. Zhao Lijun, Deputy Director of Division for International Organizations, Ministry of Agriculture of China, addressed at the opening. Mr. Zhao Bing, Head of CSAM, elaborated on the important role of private-sector in promoting sustainable agricultural mechanization and the objectives of the Roundtable. Representatives of associations made presentations of their respective associations and shared knowledge and views with regard to the strength, potentials, challenges and prospects of the agricultural machinery sector in their countries.

The participants of the Roundtable reached a consensus on establishing the Regional Council (ReCAMA), following discussions on its mandate, membership and modalities of operation, as contained in the draft Terms of Reference, according to which the Council will share information, establish network, strengthen the capacity of the national associations, voice the needs of the associations and their members, intermediate the business-government relations, and foster regional cooperation, trade and investment. All associations participating in the Roundtable became founding members of ReCAMA. China was elected Chair and India Vice-Chair of the Council for 2015. CSAM was asked to provide secretariat service and to draw an initial work plan in consultation with the members.